A gallery of artwork featuring naked woman can be a banal cliché to the art world but this series of works have an additional virtual layer of secrecy, unassuming to the naked eye. The hidden clips can be exposed through augmented reality technology which uncovers a collection of private videos and text messages.

This body of work draws on parallels between self-promotion (via social media and online dating) and marketing campaigns, consumer products and disposable relationships. Through the eyes of a single woman, it comments on the importance put on body image and physicality, reality vs virtual personas, narcissism, as well as honesty and disclosure in a digital age. 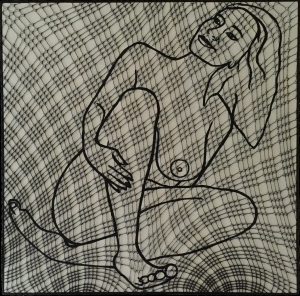 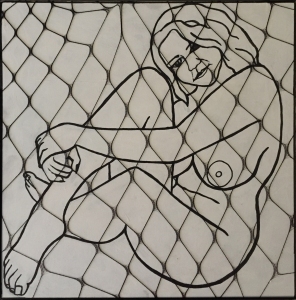 The female figures uncomfortably fit into the frame while attempting to maintain a certain sexual appeal, naked to portray vulnerability but crossed legged to show resistance. Fishnet stockings, a symbol of sexualisation, cover the canvas to further convey the idea of confinement and figuratively getting caught up in the ‘web’. The hidden videos are a statement about modern communication in virtual spaces. The viewer will need to get up and personal in a seemingly private interaction to reveal the sexually suggestive video directly through to their personal mobile device.

See a demonstration of the embedded AR  : https://youtu.be/AdkAu5ZfslU